Mobile
Posted on October 6, 2018 by Rakesh Sashmal in Mobile 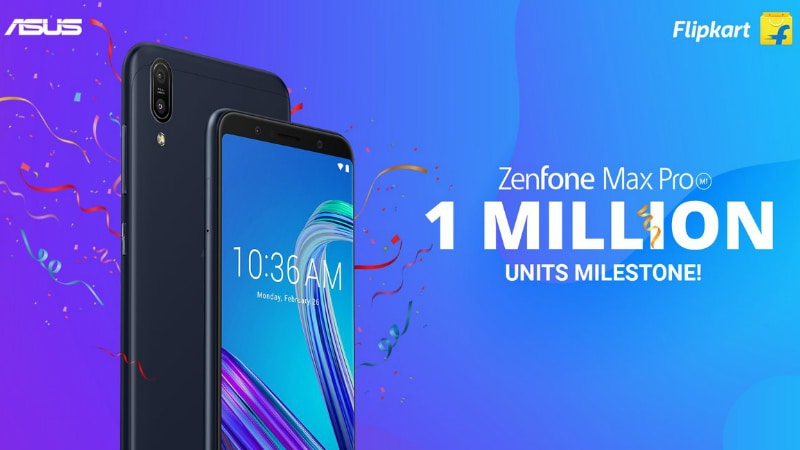 Asus launched the ZenFone Max Pro M1 smartphone in India in April this year, and now the company has announced that one million units of the device have been sold. Key highlights of the handset include an 18:9 full-HD+ display, a large 5000mAh battery (with 10W charger), a Snapdragon 636 SoC, and face unlock – all at a price starting at Rs. 10,999. The milestone has been achieved in less than six months, a feat that is commendable given the tough competition in the affordable smartphone segment.

Asus has also confirmed that an ‘exciting offer’ will be listed for the ZenFone Max Pro M1 during the Flipkart Big Billion Days sale from October 10 to October 14. The Asus ZenFone Max Pro M1 competes with Nokia 5.1 Plus, Redmi 6 Pro, Realme 2 Pro, Motorola One Power, and many others in the Indian market.

In the camera department, the 3GB RAM/ 4GB RAM variant of the ZenFone Max Pro M1 bears a dual rear camera setup with a primary 13-megapixel Omnivision sensor, with f/2.2 aperture, and a secondary 5-megapixel depth sensing sensor, both with LED flash. On the front, the 3GB RAM/ 4GB RAM variant comes with an 8-megapixel selfie camera that offers a 5P lens, an 85.5-degree lens, and an aperture of f/2.0. The 6GB RAM variant however has a 16-megapixel (f2/.0) + 5-megapixel rear camera combination and a 16-megapixel selfie camera (f/2.0). There is a 5,000mAh battery under the hood, with support for 10W charging.

Connectivity on the ZenFone Max Pro M1 includes 4G LTE, Wi-Fi 802.11 a/b/g/n with Wi-Fi Direct, Bluetooth v4.2, GPS/ A-GPS, GLONASS, Micro-USB, and a 3.5mm headphone jack. There is also a fingerprint sensor and a Face Unlock sensor on the smartphone.