Mobile
Posted on March 23, 2019 by Rakesh Sashmal in Mobile

Redmi Note 7 series is set to hit the milestone of four million sales by the end of March, Xiaomi CEO Lei Jun revealed on Tuesday — alongside detailing quarterly results. The new achievement will supersede the one million sales of the Redmi Note 7 that the Chinese company announced in early February — within just three weeks after launching the handset in China. While the Redmi Note 7 debuted in China in January, Xiaomi also started the global rollout of the new model by bringing it to India last month. The company also added the Redmi Note 7 Pro to the Redmi Note 7 lineup that is likely to contribute to its overall growth in the coming days.

Jun in one of his presentation slides while briefing the quarterly results on Tuesday highlighted that Xiaomi was aiming to hit the mark of four million sales of the Redmi Note 7 series by the end of March. Xiaomi Global spokesperson Donovan Sung also confirmed the new projection through a tweet posted on Wednesday. 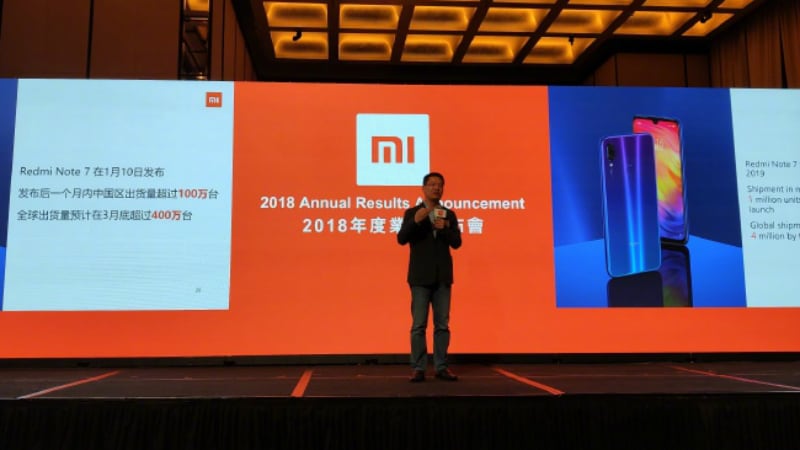 Xiaomi launched the Redmi Note 7 and Redmi Note 7 Pro in India late last month with competitive features such as dual rear camera setup, up to 6GB RAM and 128GB inbuilt storage, and MIUI 10 based on Android Pie. The Beijing-based company also recently brought the Redmi Note 7 Pro to China to offer a similar lineup to its Chinese customers that initially arrived in the Indian market. Moreover, it is also expanding the Redmi Note 7 series to other global markets to enhance its sales over time.

As per the financial results posted on Tuesday for the fourth quarter, Xiaomi’s quarterly revenue increased 27 percent to CNY 44.4 billion (roughly Rs. 45,608 crores). Sales from smartphones made up to 65.1 percent of the overall revenue of the company in the fourth quarter, whereas the revenue generated from other hardware made up to 25.1 percent. Internet services of the company also made up to 9.1 percent of the total revenue in the last quarter. All this reflects the unequivocal domination of smartphones on Xiaomi’s overall business.